#Almedalen. Probably the coolest adult education event in the world...


I don't want to spoil my new habit of daily blogging now that I have started. But today here at Fårö I have been busy with so many other things.  Anyway, now that my wife and her friends Anna Bergström & Maria Liedholm is busy with the opening of the Bergman week, I find some peace of mind to write.

Today I want to write about a unique event that is now over 40 years old, and is growing for every year:  The Almedalsveckan.  I start with quoting the official site


"In 2008, Almedalen Week celebrated its 40th anniversary. It was 40 years since Olof Palme spoke from the back of a lorry at Kruttornet, Almedalen. The political speeches of the early years have developed into Sweden’s biggest political meeting place which, via democracy and openness, gives everyone who wants to debate social issues the opportunity to take part. The openness and accessibility are unique both for Sweden and for the rest of the world."

Together with Sören Wallin (See proof from National News below) I have been scouting at Almedalen for the last two years, taking part in what could best be characterized as a fantastic people's open university. 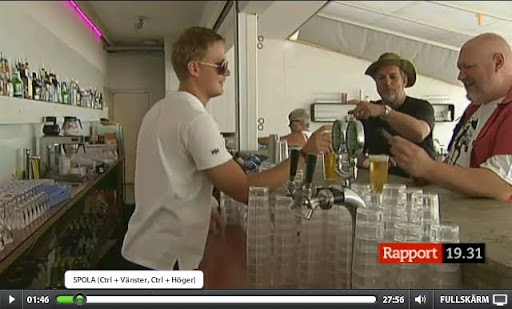 This year there will be over 1400 seminars on all kinds of topics in this event where the political, newsmedia and lobby scene has moved to the medieval town of Visby.  Walking the streets, popping in to great seminars, sneaking in to grab a free glass of rosé wine, breakfast or an evening buffe.  Finding yourself face to face with government representatives, political celebreties, TV journalist, actors or whoever is present at the scene which becomes a grand Open Space arena.
Two years ago everyone thought the event had reached the limit with around 1000 seminars.  Last year was election year and many thought that it now could not get bigger with almost 1400 seminars.  This year there will be even more.
There are many interesting observations from our participation.

A social media orgy
With almost everyone from politics, PR, lobby organisation, NGO's here this is the Mekka of social media.  I was timing the frequency of tweets during a couple of party leader speeches,  (Each night the leader of a political party represented in the parliamant holds a speech)  and measured a tweet frequency of appr 6tpm (tweets per minute).  Being able to follow the comments from the tweetsphere and compare it with the noice from the audicence in applause and acclamation was interesting.  One party leader got really enthusiastic appplause, but was smashed in the tweets..  It becomes an almost absurd experience watching the crowd walking around with their nose into the IPhone or Android gadget.

Three simple rules does the work
With any traditional business logic imaginable these rules would not work.  In order to get a seminar into the Almedalen Catalogue you have to comply with three simple rules:
So how come organisations, parties, companies are spending hundreds of thousands of kronor to arrange seminars where they cannot choose who comes, cannot charge money for participation, and are not even allowed to sell something to the people who come?

This year I will continue my scouting,.  However, on Monday July 4th I will also work for Plast & Kemiföretagen / The Swedish Plastics and Chemical Federation to be responsible for Process Documentation of the "Vision Day" they will arrange at Gotlands Museum.  The topic is how Sweden can be world leading in sustainable development and the time will be set at 2030. It will be a full day with six seminars each with a specific topic that will set a vision out of the present moment of 2030.  The participants (you could be one of them) will work in groups after each presentation to create scenarios on how the vision became reality.  Stay tuned in this blog and I will share that day.


Good night.  Enjoy the slideshow at the top from last years Almedalen.
For twitterers:  The hashtag is #Almedalen

The journey started a long time ago, ideas connecting to Tanzania, spreading to Scotland, Orkney and Shetland islands.

In Orkney, Shetland and Western Isles the idea has been picked up to form the MetaSaga and the gaelic, "Metasgeul".
The Metafari connected to Off Grid development issues. This took us to travel with www.HiNation.org for a market and feasability study around the HiLight.
Follow our journey here.

In the beginning of 2011, Rafael and Leif undertook a new journey in Tanzania. Find our postings in this blog.

All this is developing into the core of the company MetaSpace, an adventure that is truly Glocal. In these days of clear communication and simplification we explore new perspectives into the unknown world of tomorrow.

This summer of 2011 the blog is used to explore ideas and experiences as we want to merge this blog into the website of www.MetaSpace.se - Join the journey, and explore together with us.